What is an Astroturf Campaign?

Astroturfing is the practice of masking the sponsors of a message (e.g. political, advertising, or public relations) to give the appearance of it coming from a disinterested, grassroots participant. Astroturfing is intended to give the statements the credibility of an independent entity by withholding information about the source’s financial connection. The term astroturfingis a derivation of AstroTurf, a brand of synthetic carpeting designed to look like natural grass.

The Skeptics are the Sheriff’s Department of the “Thought Police”. Not be to be confused with the genuine Skeptics like Carl Sagan or Neil deGrasse Tyson — these people exposed in this blog are those who hide behind the Skeptic Movement as a medium for their paid propaganda. Not all of them, but those at the top are paid, while feeding their blithering nonsense to their “followers”, very cult-like. The followers just blindly believe in whatever they say, without researching anything. Not exactly the behavior of a Skeptic huh? Pretty embarrassing for them, but hey, people are pretty stupid and will believe anything their trusted peers say without verifying any of it! The Skeptics in this blog care not about Science, that care not about Research, they care only about destroying any scientific innovation that threatens the current status quo. They are there to protect the “establishment” and like its name, it is “established” and it not open to change.

The very idea that they identify themselves as “Skeptics” is one of the most hilarious, yet sad, oxymorons set forth in our society.

Bob Blaskiewicz, the creator of the bizzarely perverted death list known as the “other Burzynski patient group” & the internet’s leading astroturfing sociopath and troll apparently got a raise and created a FAKE twitter account in Dr. Burzynski’s name (Bob quickly yanked it down out of fear of being sued into homelessness and losing his other “cover job” allegedly “teaching english” to children):

He also makes rude videos too, here is a screenshot:

Guy Chapman, another professional Astroturfer against anything of scientific innovation that competes with the status quo, pretends to not know how to spell “astroturfing“.

This tweet above is quite comical. “Guy Chapman” is the “Editor in Chief” and lead Gate Keeper to the “Burzynski Clinic” Wikipedia page. He is a dangerous and well-paid sociopath, much like Orac/Gorski and Bob Blaskiewicz. If you are wondering why the Wikipedia Page on “Burzynski” reads like a North Korea Tourist brochure, ask Guy Chapman.

Notice PHIL HARRIS’ tweet. Racism is also common with the personalities the industry hires to carry out this dirty work. Sort of like hiring a professional hit man, these are not nice people. Imagine how deranged a human being must be to sit around all day getting paid to insult cancer patients on twitter and anyone practicing the concept of “thinking for yourself”. It’s right out of the policies of Mein Kampt.

Robert “Bob” Blaskiewicz is an unbridled sociopath who sadly teaches English to children (if their parents only knew)  – which is hilarious that he claims to teach “science” (lying pathologically is a part of the package of a sociopath like Bob)-  he spends all day, every day, 7 days a week, nearly 24 hours a day following internet alerts to fight anyone online who finds out about Dr. Burzynski, a Burzynski patient, or anyone that dares talk about stepping outside of the status quo in regards to trying to save their own life (think Holocaust prisoner seeing an open door to the bunker, and Robert “Bob” Blaskiewicz is the guy that is secretly working for Hitler that says “oh no, you need to stay here, you will be fine if you stay here.” If you encounter this lunatic online, steer clear, unless you are ready to enter a realm of nonsensical, illogical, crazy neo-nazi style fireworks of fear, hate and unbridled bigotry.

Robert “Bob” Blaskiewicz is also the lunatic behind the cancer death list called “the other burzynski patient group” – He’s a very unstable and sick person.

Peter Bowditch aka “Rat Bags” is one of the meanest, sociopaths out there on the internet in regards to harassing people suffering from cancer. Dr. David Gorski aka Orac and Blob Blaskiewicz do not hold a candle to this guy. Orac/Gorski and Blob wish they would have been a part of Hitler’s SS brigade—but Peter Bowditch, he wishes he could be SATAN himself. 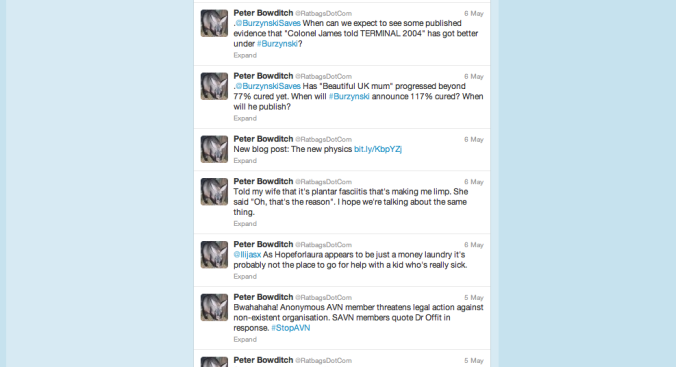 “Dr.” David Gorski is the highest paid of them all. Writing under two names #1 “Dr.” David Gorski (where he pretends to not be a hateful bigot); and #2 “ORAC” where under his fake name, unleashes a fury of paid bigotry and hate unmatched by the late Adolf Hitler. 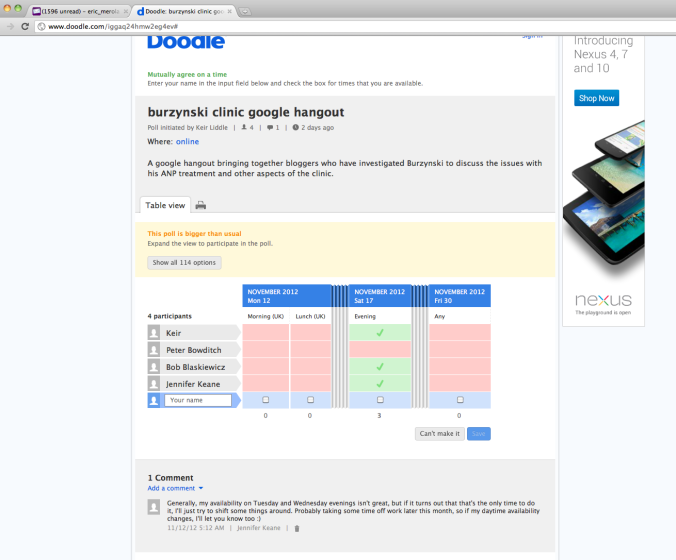 Just a small collection of the ranting tweets of hate from the Astroturf campaign known as “The Skeptics” towards scientific innovation that competes with the status quo, with a heavy focus on Dr. Stanislaw Burzynski and any of his patients. The Cancer Industry relies on such campaigns coupled with their Guerrilla-style internet vandalism tactics to highjack the search engines with slanted, biased, straw man, and often falsified information. You will notice they will never address a root argument. They rely only on bigoted and Chauvinist remarks, feeding on the fear in people – instead of rational and reasonable discussion. It is only a matter of time before they begin picketing the funerals of cancer patients.

I read this quote on The Burzynski Movie Facebook page recently, and though it was quite fitting for this post:

“Taking one simple glance at history—using simple common sense—we will find that everything of scientific innovation has come from the fringe, and directly threatened the status quo at the start. From The Wright Brothers to Steve Jobs – they were all once considered “fringe mavericks” until their efforts merged into the mainstream and became a participant in the “status quo”. The status quo is there to create its own legion of followers, while only those who dare to step out of it and take a risk with something that could change it—those are the only people in human history that have ever contributed to changing it. These innovators didn’t listen to anyone except their own hearts and minds—while ignoring all the noise around them.” (this quote was apparently film director Eric Merola’s quote)